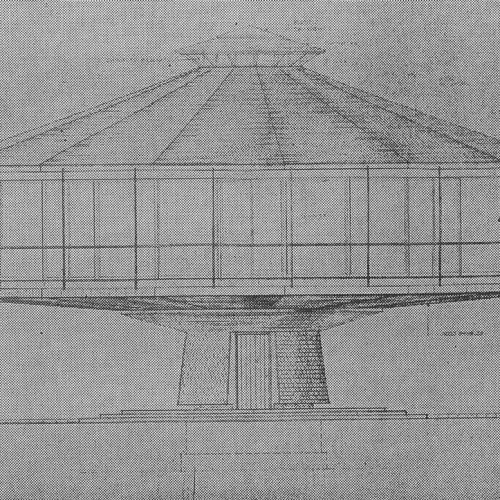 Plans for a Dream – Plans drawn by Mr. Foster showed what the house would look like on completion. A 6,000-pound motor in the pedestal of the structure turns the half-million pound upper structure completely around at the flick of a switch. Aluminum and glass slid-ing ,window units afford maximum viewing. 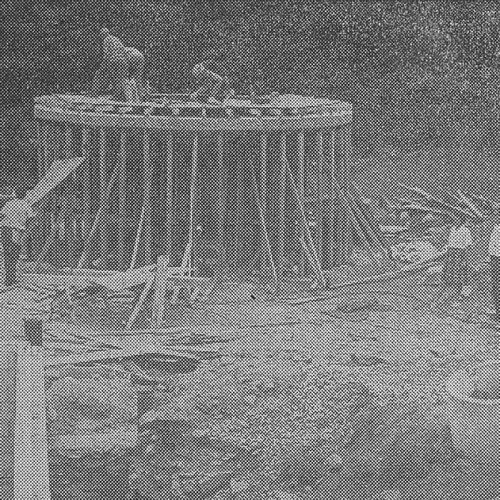 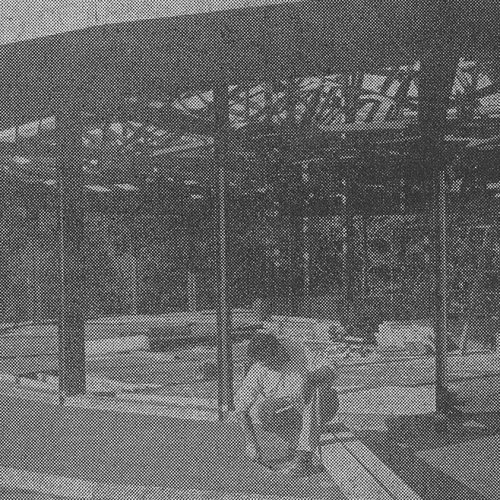 Prepares Patio — A workman smooths cement base which is now paved with imported granite cobble stones from the Dolomites in northern Italy. Photo: Post Photos Schulze 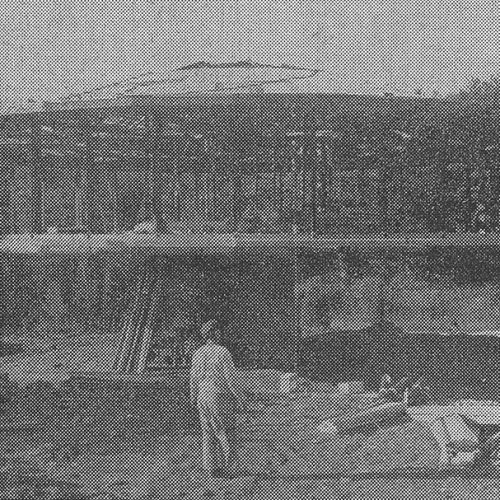 The Frame — G. H. Olson, Inc., of Stratford, fabricated anit erected the structural steel frame. Though Mr.’ Foster will not reveal the cost of the house, it has ‘been estimated by building experts to be in excess of $100,000. Photo: Post Photos Schulze 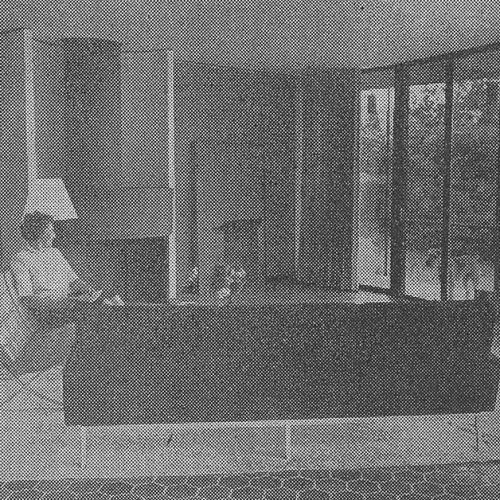 The Living Room – Mrs. Foster loves to storms and the house has been turned to catch spectacular 11: Steel fireplace is an original by Trio Industries, Inc., of Bridgeport. Chair, coffee table, and sofa are by Mies’ van der Rohe. Floors are of unglazed tile for easy maintenance. Photo: Post Photos Schulze 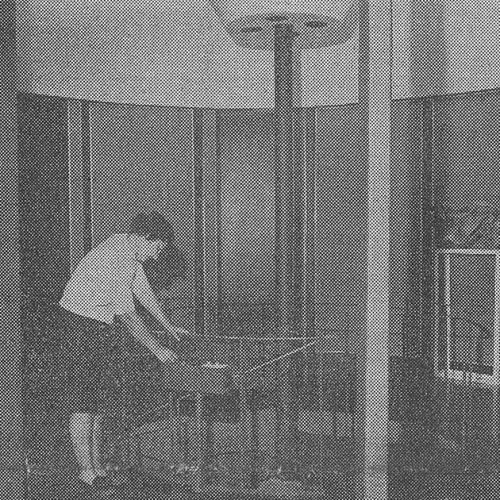 Operates House Motor — Mrs. Foster switches on the motor. There are 10 speeds and “two directions,” Mrs. Foster says, forward and reverse. The members of the Foster family are obliging about switching on the motor for visitors. Photo: Post Photos Schulze 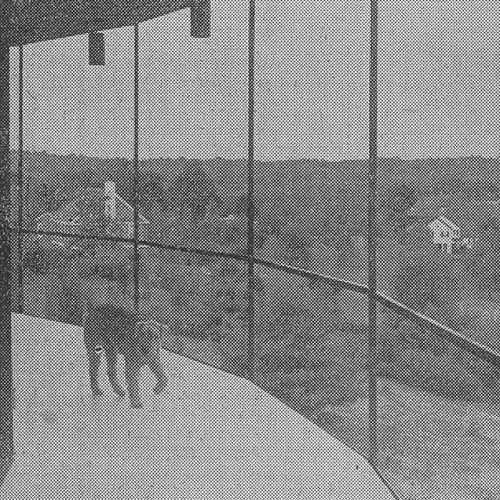 Goes Around in Circles — Beau, the family dog loves to walk the outer leek and survey his changing kingdom. Sometimes, as in this case, he is not always sure which glass door will slide open to let him in, since his point of departure has gone around bend. Photo: Post Photos Schulze 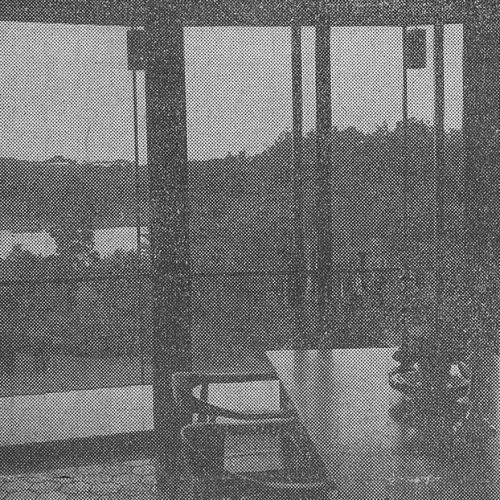 The Revolving House — This is the only revolving house in the world, ac-)rding to research done by the family of Richard Foster, Wilton architect who built the Duse for his own use high up a hill. The house turns to take advantage of the many .ews afforded by the four-acre site. A favorite view is that of the pond stocked with bass. he house is 30 feet high. Photo: Post Photos Schulze

How fast does your house go?

Architect Richard Foster’s newly completed mushroom-shaped house in Wilton moves from nine inches to five feet a minute—the only house to do so in the world, he says. The revolutionary two-story home swivels in whatever direction is desired, to the right, or to the left. “Forward or reverse,” Mr. Foster says.

The house pirouettes to take advantacrbe of the 360-degree panoramic views, he said, and to follow the sun. “We are living in a mechanized age, and there is no reason for a house not to be mechanized,” ‘he said.
The house, which also resembles a truncated lighthouse, is powered by a one and ‘a half horsepower electric motor from the Rotek corporation in Ohio, “a pioneering concern also,” Mr. Foster smiled. The 14-foot gear was imported from Germany.

The apparatus weighs 6,000 pounds,Rotek manufaCtures multiload bearings for large cranes and excavators. The mechanism is capable of taking vertical loads of up to five million pounds and resists sideways pressure of winds up to 125 miles per hour.

The weight of the house hangs from a ring at the top which, in turn, is transmitted down on all sides to the huge bearings. This system of equalizing load distribution solves any balance problems which could occur if a crowd of 60 persons congregated in one particular room with no counterbalanced load on the other side of the house. The powerful ball-bearing assembly which incorporates a speed-reduction unit is housed in, the pedestal of the house. Its task is to rotate the approximately 30 foot high upper structure which weighs a half million pounds. The 70 foot in diameter “floating disc” contains a five-foot wide deck on its outer edge, a den, three bedrooms, kitchen, dining room, living room, all wedge-shaped, and two and a half bathrooms. Floor to ceiling glass window sliding units circling the upper story afford maximum viewing of the sloping valley which overlooks Pope’s Pond reservoir. The pedestal and roof are covered with white cedar shingles. The four-acre site on which the structure is located, Mr. Foster points out, forms a natural amphitheater and the residence