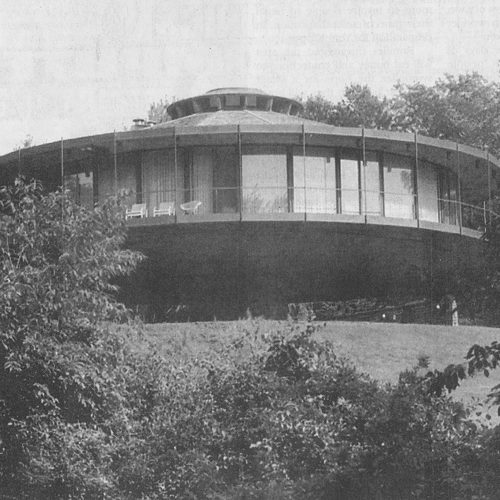 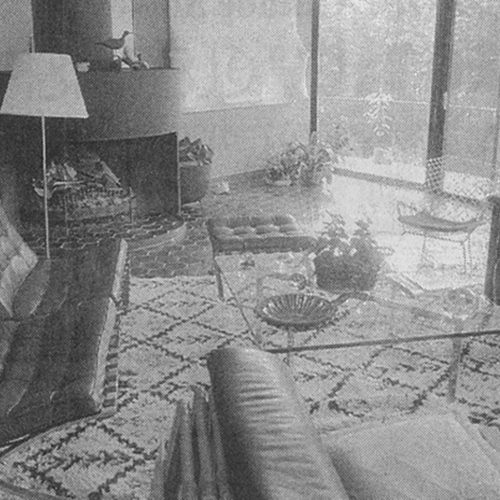 Modern interior of the Foster living room fits with the overall design of the home. Photos courtesy: Villiger – Susan Warner 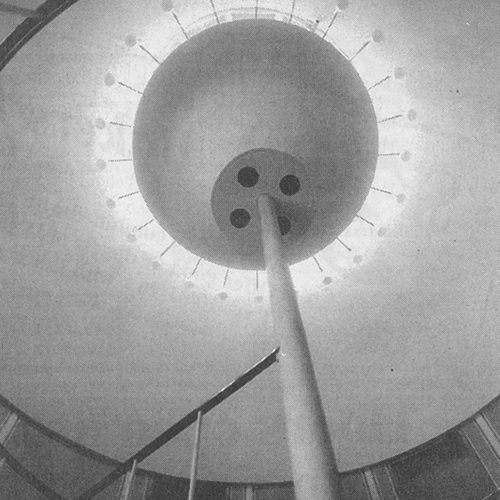 The center column of the 1969 house offers a hint of the home’s functional artistry. Photos courtesy: Villiger – Susan Warner 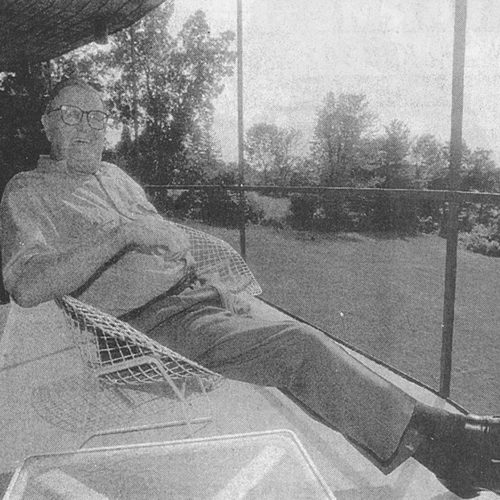 An Ever-changing Window on the World

Richard Foster’s home would be marvelous even if it didn’t rotate. The circular house sits in the air on a relatively narrow pedestal – “much like a mush-room,” Foster says – with its 220 foot surface of 9-foot-high windows offering views of the surrounding meadows, pond and valley.

But though the interior is also interesting, with its contemporary art and fluid floor plan that blurs the line between form and function, the excitement begins when Foster, standing on the outside deck which encircles the house, asks his guests to excuse him for a moment.

“I’ll go put the house on so You can see for yourself,” he says and disappears inside. When he returns, sure enough, the house has begun to make its slow rotation.

Although fellow architects have dubbed it “circambulant” or “Carousel” house, and admirers have likened the structure to a flying saucer, Foster, its creator and owner, prefers a nautical analogy. “The concept here was to be a ship on a pylon and [to] let the sea – the landscape — wash around it,” he says, waving a hand toward the passing landscape. Foster and his wife, Eleanor, have lived in the how since it was completed in 1969. Principal of the Greenwich-based Richard Foster Associates, he has designed of number of landmark buildings: New York University’s Tisch Hall and Elmer Holmes Bobst Library, the Eastman Dental Center (Rochester, N.Y) and the Kline Biology Tower at Yale. “The Round House” or “Lazy Susan House” as it has been called, created a sensation after it was built. “I had a file drawer full of requests from people for the plans,” Foster says. “I answered them politely [a polite “no”] and then forgot about them.”

The house rotates on a giant ball bearing cast in Germany. “It’s the same kind [of bearing] used for a gun turret on a battleship,” Foster said. Speed can be adjusted from one rotation every 48 minutes to two rotations every 24 hours. A two-horsepower motor insures a slow, tranquil journey. The press of a button will stop or start the house at any time.

Foster explains how turning the house enhances the mood of a room or setting. During a recent dinner party, for instance, he turned the house west to catch the sunset; later, he turned it east to watch the moon rise. Another turn to the north provided a view of a forest of white pines, which are illuminated with in-ground lighting.

Rotation offers practical bene-fits, too. “On summer nights we can turn it into the breeze,” Foster says, adding that it often eliminates the need for air condition-ing. Similarly, he says,”in winter we will turn it into the sun” and instantly fill a cold room with warm, soothing sunlight. This reduces the need for oil heat.
But while the home’s unique exterior draws the most attention, its true beauty can only be under-stood from the inside. Foster says, outlining his philosophy on archi-tecture. “From there, I make it flow, make it work.”

To make visitors conscious of his home’s fluidity, Foster explains that “part of the plan is to squeeze you.” •A narrow driveway funnels guests into the parking area, where they are confronted with an unimpressive cedar-shingled wall. The wall blocks the view of his property, as well as the tower on which the house rests.

From there visitors pass through a gap in the wall that opens to a circular terrace under-neath the house. Although it is open, the terrace is dark from the overhead shadow; it betrays few glimpses of the property. Only after proceeding through the front door, where visitors again are “squeezed up and through” the spiral staircase into the main hall and living room, do visitors see the breathtaking, panoramic view of the property with its woods, pond and meadow that rolls down to a valley and lake.

“It is a very ceremonial way of entering,” Foster says modestly, “where you don’t give away your main view” Because the Fosters’ house looks down on most of the land-scape, they often see things that would be missed at ground level. “You get to know nature here,” the architect says, explaining how deer, rabbits, foxes, coyotes and birds go about their business in the meadow and pond near the house.

“They will come out in the evening and we can continue to sit up here and have a conversation,” Foster says. “They never look up.” When it was first built, people came from near and far came to look at the house. Then, over the years the landscape changed; fields have grown into woods or housing lots, and there are no longer any easy vantages for view-ing the Foster home.

But though the area has changed, Foster says the house has not. He added insulation a few years ago, and greased the ball bearings for the first time. He never has to paint the exterior, which is made of steel, glass and cedar shingles. The only chore is cleaning the 1,980-square feet of windows, which Foster says takes about an hour and a half.

The architect adds that the’ windows are well worth the effort. “Washing little windows in colonial houses is beyond me,” Foster says. Glancing out through the 9-foot high windows at the rolling landscape, he asks, “Why would you want to lock yourself up with little windows?”