Architect’s Revolutionary Idea: Living in a House that Rotates 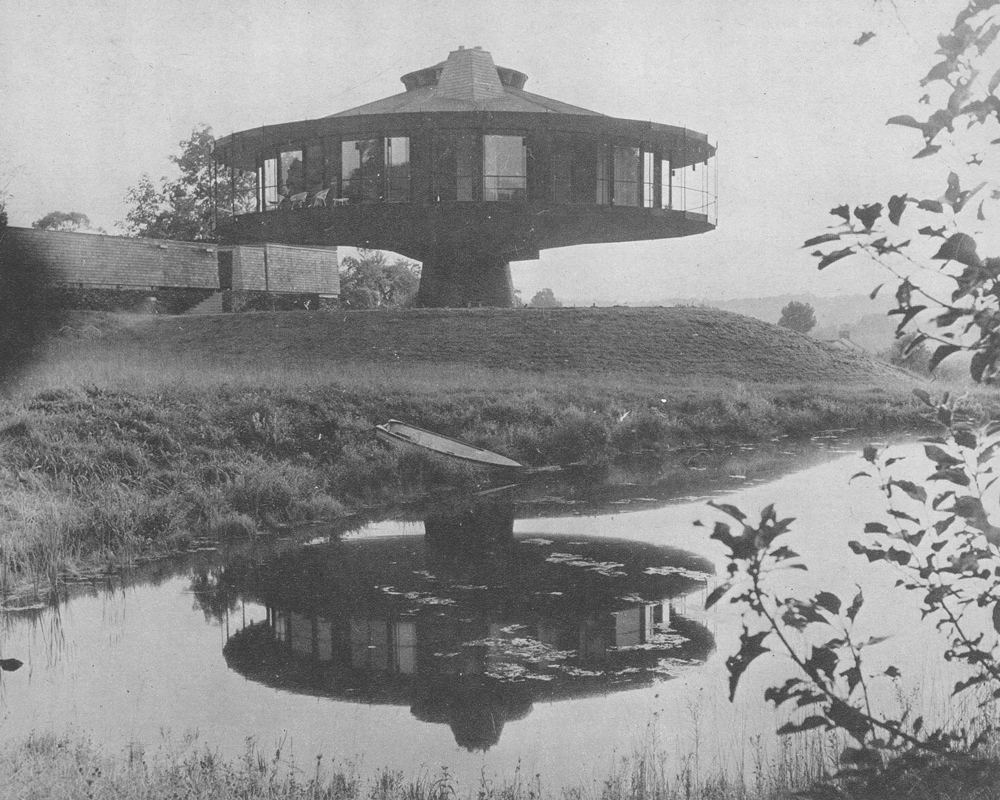 WILTON, Conn. The front door of Mr. and Mrs. Richard T. Foster’s house here is always in the same place. The rest of the house isn’t–always.

The living room may face the pond in the morning, the pine woods in the afternoon and the rolling hills in the evening, and as one room moves, so move the others. The Foster family can change the view with the same ease that other people can change a television channel.

They live in a revolving house. The front door, reached by crossing a cobblestone terrace, is at the base of the core of the house. It is stationary for obvious reasons. “If the front door were here one day and there the next, a casual visitor could become disoriented,” Mr. Foster explained.

Resemblance to Hybrid Mushroom A fixed circular staircase in the core leads from the door up to the living quarters. The rooms don’t al-ways revolve. Just sometimes. There are hours and hours when the house rests in one position, looking for all the world like a thick hybrid mush-room of steel, wood, shingle and glass.

“We press the buttons when we want to change the view; sometimes twice a day, sometimes four times a day, it depends,” Mr. Foster said. “We don’t just take rides.”

Mr. Foster doesn’t take rides, but occasionally his three sons do. The temptation is particularly strong when school classmates and friends are around.

“They are amazed; they think it’s fantastic,” said Robert, a 20-year-old student at Alliance College in Cambridge Springs, Pa. There are two other sons: Craig, 21, at Columbia Medical School and Bradley, 16, at Wilton High School. The motion of the house is con-trolled by three buttons and a dial that Mr. Foster describes as “simple enough for a 4-year-old who can read.” The buttons say “forward.” “backward” and “stop.” The dial, numbered from one to 10, regulates the speed. It’s located in a shoe-box size panel in the central core, adjacent to the stairway.

When the house is going at top speed, it can make a complete turn in 48 minutes. At the slowest rate, it takes four hours. Even at the highest speed, there is no sensation of movement. The awareness comes only when one realizes that the scenery is changing.

A 49-year-old architect with offices in New York, Mr. Foster designed the house himself. The rotating feature wasn’t planned originally. The idea evolved gradually after four previous sets of plans had been drawn up and discarded.

“The site is a natural amphitheater, and the earlier plans didn’t take full advantage of it,’ he said. “When the idea came to me, the only problem was finding the right parts. As far as I know, this hasn’t been done before in any country.”
Mrs. Foster thought the idea was revolutionary, but was all for it. “When he said, ‘Let’s turn it,’ I thought it was the obvious answer,” she said. “It doesn’t change the housekeeping; it’s perfectly normal inside.”

The integral part of the house is a 14-foot ball-bearing assembly that moves the structure around the pivot of the stairwell. The bearing is the same type used for gun turrets on warships, radar antennae and earth-moving shovels. It is powered by a one-and-a-half horsepower motor and the running cost is approximately that of a refrigerator.

Mr. Foster wasn’t concerned, but he has nevertheless been assured that the bearing could be used constantly for 87 years before it would wear out.

The interior of the eight room house is as modern and uncluttered as the face it presents to the world. The moms are wedge-shaped but, be-cause they are built around the fat core, they have a broader base than a slice of pie.

The living room has a steel fire-place and is furnished with Mies van der Rohe chairs and a coffee table as well as a straight-lined sofa. covered in black wool. It is completely open to the stairwell. The other rooms have walls and doors that close them off from the stairwell. The entire outer wall of the house is of glass. The rooms have draw curtains, but they aren’t really necessary.

“We have complete privacy any-way,” Mr. Foster said. “And if the sun is annoying, we can turn the room in another direction.”

Materials used in the circular structure, which measures 72 feet in diameter, are almost maintenance-free. The floors, other than wedge shaped oak planking in the hall, are hexagonal ceramic-glaze tile. The roof makes use of cedar shingles and the terrace is in a Fiberglas-base, resin-top material used on ship decks.

To the visitor, the interior conveniences look like any others but such things as plumbing, electric it gr heating and telephones posed their own problems.

Solutions Taken From Industry Some of the solutions were a 360-degree water valve used in the oil industry; an industrial-type trolley for the moving power supply, especially bent for the round house; tanks for the oil furnace located under the roof and telephone connections using radar commutators. None of the un-usual appurtenances are visible. Mr. Foster declines to discuss the cost, but he estimated that it was 15 to 20 per cent higher than it would have been if the house had been stationary.

“This house was a pilot,” he said. “The same principle could be related to any house one had in mind; the shape has nothing to do with it.” Since the family moved in several months ago, there has been a constant stream of cars and visitors. Some merely park and gaze, others ring the doorbell and ask to see the house. A few, who find the door un-locked, wander up the staircase to look around.

“Up to now, we’ve been courteous.” Mr. Foster said.
One of the most frequent questions he is called on to answer is, “If it’s so simple, why hasn’t anyone else done it?”
He shrugs his shoulders.

“I tell them, ‘Look how long it took man to get out of the cave.’ ” Mr. Foster, whose firm is pres-ently working on projects that include the Montauk Golf and Country Club, a health and mental hygiene center for the Rockland State Hospital and the Beth Torah Synagogue in Brooklyn, said he enjoyed design-ing houses.

He thought for a little while before he added:
“They keep you off base.”