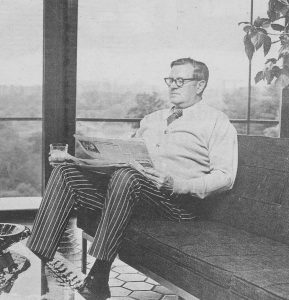 Every building generates its own solution, which becomes correct to the architect when a sense of inevitability of all its considerations prevails.

Architecture goes beyond building… it enhances the nobility of man’s earthly sojourn.

It is an accepted fact that architecture reflects the values of the age in which it was built. If that is so, what would we consider our values to be if we allowed a force to gain entrance to our museums and destroy a large portion of irreplaceable art, or somehow destroy a large proportion of our traditional music so that it could never be heard again, or our literature so that it could never be read again?

The reaction to such an outrage would, hopefully, be excessive. Yet, when it happens to our architecture, our history and our inheritance from ages past, we meekly allow the destruction to go forward unimpeded as long as the favorite catch words of progress, urban renewal or functional obsolescence are attached.

Isn’t it sad that our present concept of living is so transitory that we can no longer conceive of building for the ages? Are we so insensitive that we believe comparable buildings cost more now, when related to the value of money, than they did in the past?

We are so victimized by diminished values that our structures now follow certain segments of industry, where predetermined obsolescence is the governing achievement, and cut-rate structures become the norm. We now boil down and cost-study everything to its lowest common denominator.

Consider this: the second largest building in the United States, prior to the Civil War, was built to manufacture pianos! For our time, the Pentagon might hold that distinction.