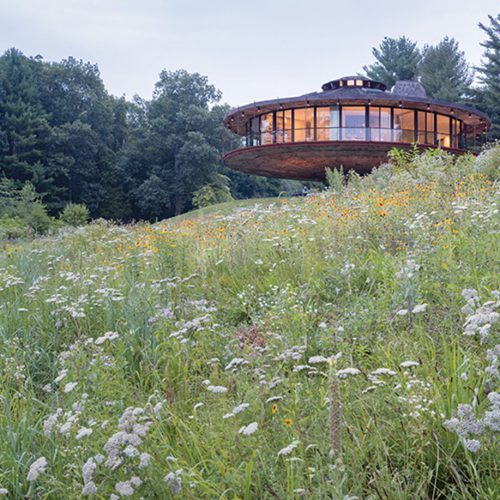 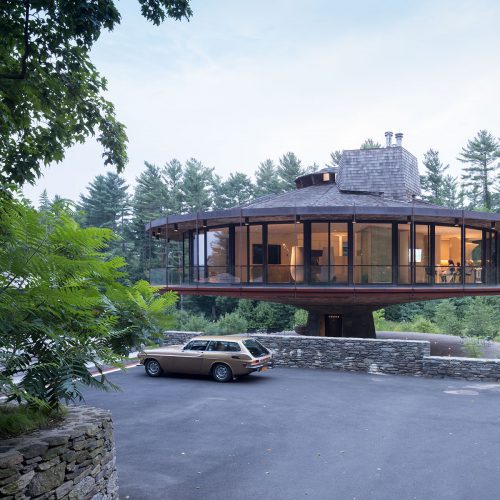 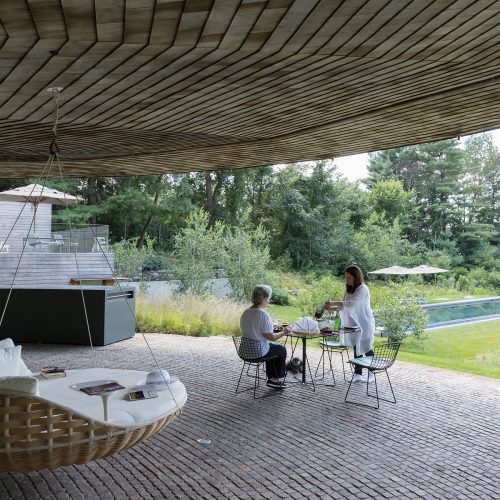 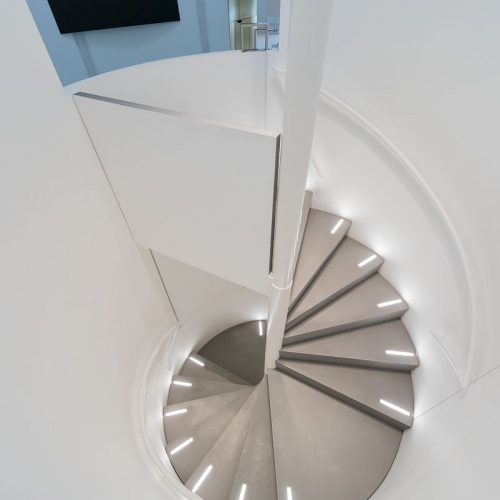 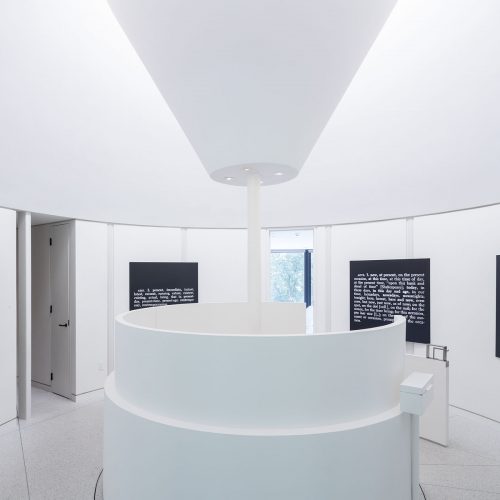 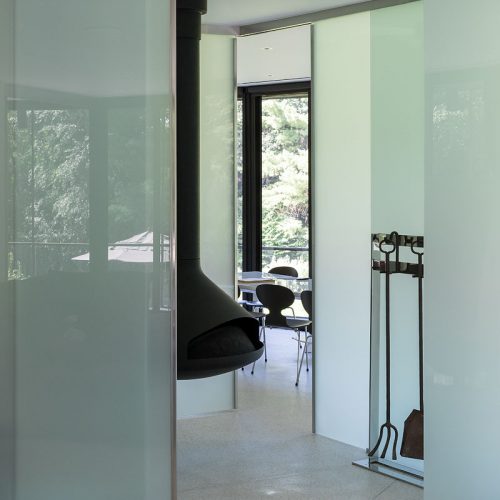 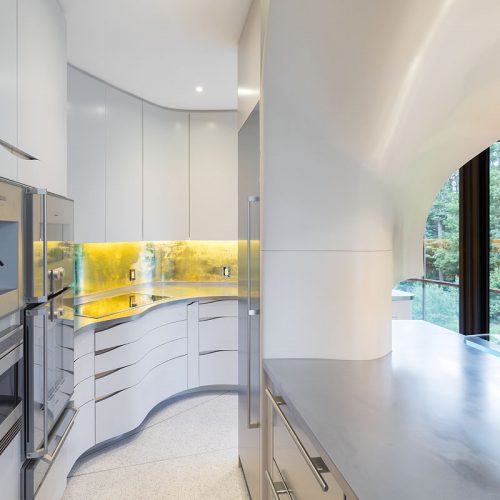 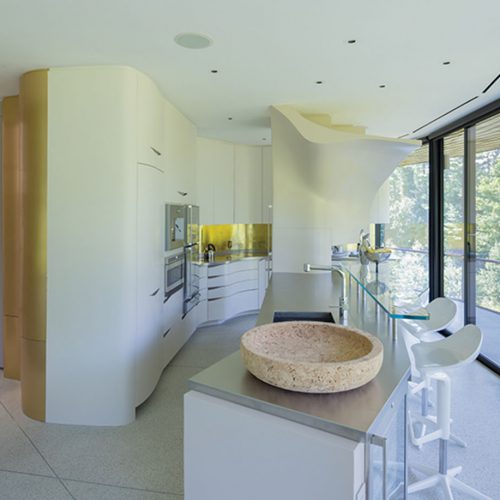 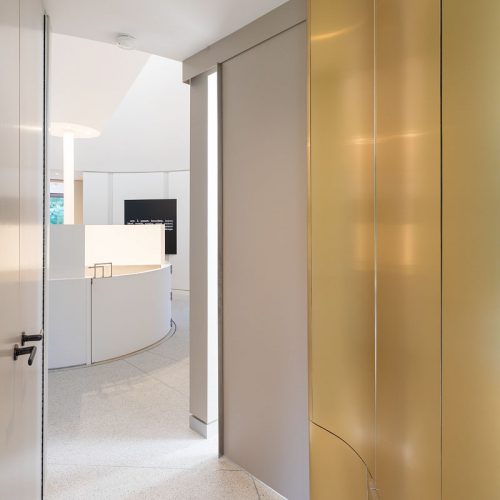 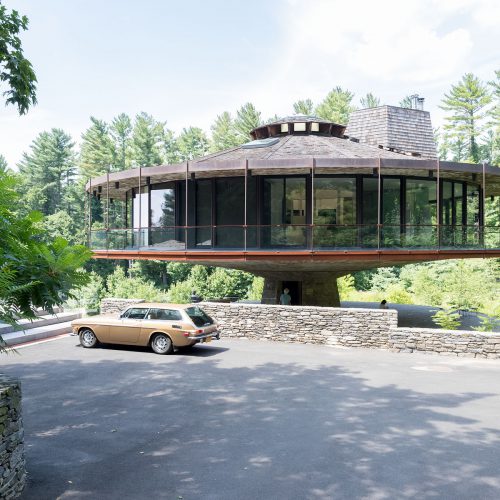 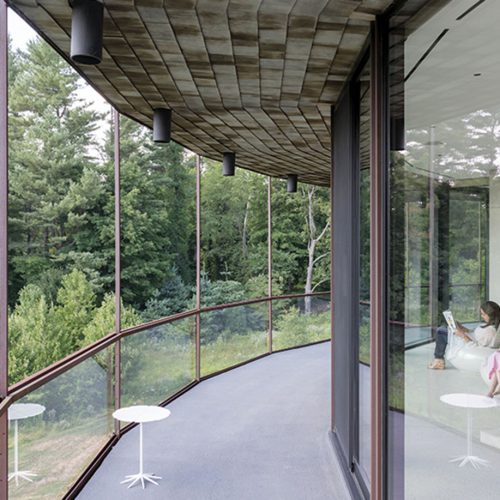 Architect Richard T. Foster caused quite the stir when his mushroom-shaped house sprouted out of the rural Connecticut landscape in the spring of 1968. Not only did the structure resemble something from the Martian Chronicles, it rotated in both directions atop its trunk-like pedestal. When The New York Times asked Foster—a protégé of Philip Johnson—why such residential designs had yet to catch on, he shrugged: “Look how long it took man to get out of the cave.”

Nearly half a century later, Foster’s Round House—floating over the landscape like a marooned spacecraft—still feels thrillingly radical. But when a pair of Manhattanites purchased the house in 2010 as a weekend getaway, it became clear that it required some upgrades. The owners turned to Atlanta-based architects Merrill Elam and Mack Scogin to breathe new life into their unusual home.

“Our initial thought was, whoever buys a round house that moves has to be very interesting,” says Elam.

They also may want to stock up on Dramamine. Foster’s 500,000-pound house rotates around a fixed, 9-foot-tall spiral concrete stair using a 3-ton ball bearing assembly. The 72-foot-diameter upper volume relies on an umbrella-shaped steel structural system and—unlike revolving restaurants of the period—an ingenious scheme of concealed trolleys and troughs that allow the plumbing, electric, and water connections to pivot with it.

The machinery may be complex, but the user controls the house with the push of a button on a shoebox-sized control panel. Relying on just a 1.5 horsepower motor, the house can revolve up to 5 feet per minute. For the unaccustomed, it can feel a bit like traversing the deck of a ship.

In spite of the home’s revolutionary nature—both literally and figuratively—little daylight from the 360-degree windows penetrated its center. “It was a little melancholy,” says Scogin, a sense amplified by Foster’s strict adherence to a radial floor plan, so that rooms surrounded the stair core like pie slices.

Scogin and Elam sought to “soften” the house by breaking up the geometries and by bringing nature into the interior. This begins as soon as one ascends the spiral stair in the house’s “trunk.” The architects built a low wall around the floor opening so that—like a stage curtain prepped for a big reveal—a visitor’s first views are out to the undulating landscape, not the terrazzo floor.

From the stair, one can access the living room, the kitchen, the master bedroom suite, or the children’s room— depending on where the house is in its orbit. A previous renovation eliminated a wall to unify the kitchen and living areas, but the architects also opted to remove additional partitions to allow for a more generous master bedroom suite and a larger bedroom for the clients’ 10-year-old daughter.

Scogin and Elam replaced the single-pane windows with double insulated glazing, restored and replaced the original weathering-steel fascia, and upgraded the cedar shingle cladding where necessary. Working with Foster’s archives, which the clients obtained from the architect’s son, they were able to track down the original cobblestone specialist to redo the outdoor terrace, and the schematics for the ball bearing assembly. Remarkably, the mechanical components required minimal servicing—though the house needs the occasional greasing.

Peculiar maintenance aside, the family has adjusted to life in their futuristic abode. They set it into motion every day—whether to entertain guests, to get a better view of their chicken coop, or to move away from the din of pond frogs at night. The clients have put this part of Foster’s archive online, so that the public can learn about the architect’s extraordinary home.

But the extra exposure might be unnecessary: tourists will often park in the driveway to gawk. Luckily, the owners can simply turn the house away.