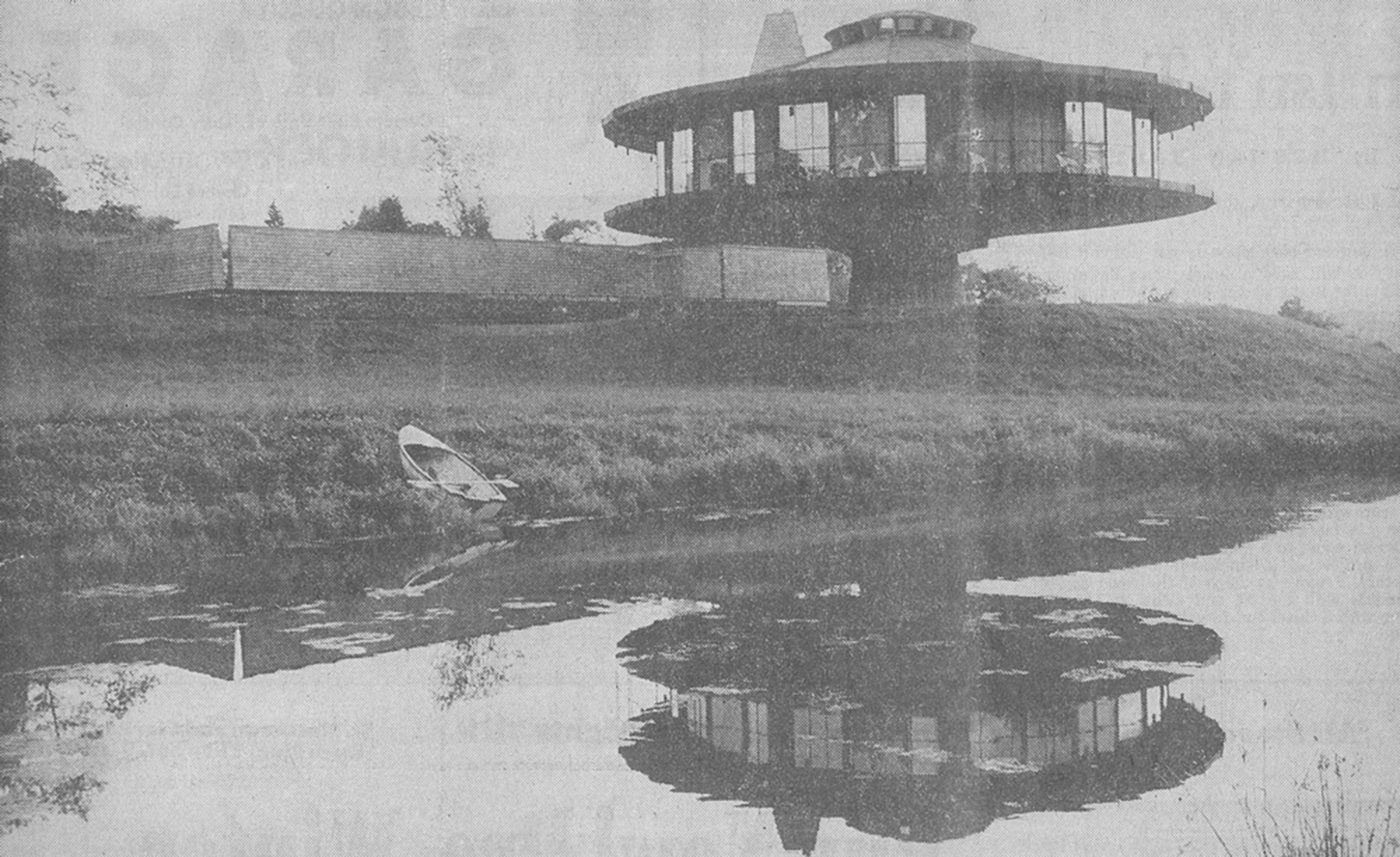 WILTON, Conn.—The front door of Mr. and Mrs. Richard T. Foster’s house here is always in the same place. The rest of the house isn’t—always.

The living room may face the pond in the morning, the pine woods in the afternoon and the rolling hills in the evening. As one room moves, so, move the others. The Fosters can change the view with the same ease that other people can change a television channel.

They live in a revolving house.

The front door, reached by crossing a cobblestone terrace, is ‘at the base of the core of the house. It is stationary for obvious reasons.

“If the front door were here one day anywhere the next, a casual visitor could become disoriented,” Foster explained.

Looks Like a Mushroom
A fixed circular staircase in the core leads up from the door to the living quarters. There are hours hours when the house rests in one position, looking for all the world like a hybrid mushroom of steel, wood, shingle and glass.

“We press the buttons when we want change the view; sometimes twice a day, sometimes four times a day, it depends,” Foster said. “We don’t just take rides.”

Foster doesn’t take rides, but occasionally his three sons do. The temptation is particularly strong when school classmates and friends are around.

4-Year-Old Can Run It
“They are amazed; they think it’s fantastic,” said Robert, a 20-year-old student at Alliance College in Cambridge Springs, Pa. There are two other sons; Craig, 21, at Columbia Medical School and Bradley, 16, at Wilton High School.

The motion of the house is controlled by three buttons and a. dial that Foster describes as “simple enough for a 4-year-old who can read.” The dial, numbered from one to 10, regulates the speed. It’s located, in a shoe-box size panel in the central core, adjacent to the stair-way.

When the house is going at top speed, it can make a complete turn in 48 minutes. At the slowest rate, it takes four hours. Even at the highest speed, there is no sensation of movement. The awareness comes only when one realizes that the scenery is changing.

A 49-year-old architect with offices in New York, Foster designed the house himself. The rotating feature wasn’t planned originally. The idea evolved gradually after four previous sets of plans had been drawn up and discarded.

“The site is a natural amphitheater, and the earlier plans didn’t take full advantage of it,” he said.

The integral part of the house is a 14-foot ball-bearing assembly that moves the structure around the pivot of the stair-well. The bearing is the same type used for gun turrets on warships, radar antenna and earth-moving shovels. It is powered by a one-and-a-half horsepower motor and the running cost is approximately that of a refrigerator.

Foster wasn’t concerned, but he has nevertheless been assured that the bear-ing could be used constantly for 87 years before it would wear out.

Foster declines to discuss the cost, but he estimated that it was 15 to 20 per cent higher than it would have been if the house had been stationary.

“This ‘house was a pilot,” he said. “The same principle could be related to any house one had in mind; the shape has nothing to do with it.”

Modern Interior
The interior of the 8-room house is as modern and uncluttered as the face it presents to the world. The rooms are wedge-shaped but, because they are built around the fat core, they have a broader base than a slice of pie.

“We have complete privacy anyway,” Foster said. “And if the sun is annoying, we can turn the room in another direction.”