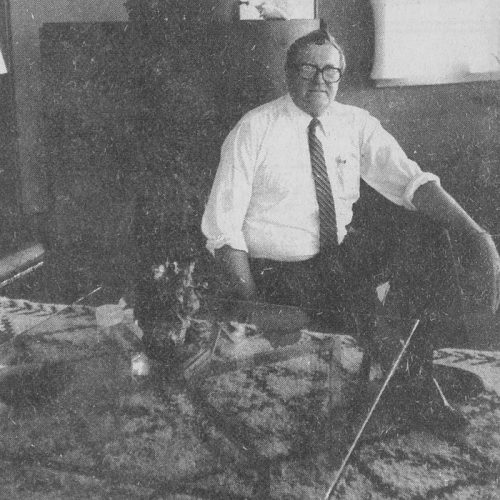 Circular Fireplace in back of architect Richard Foster, in his home on Olmstead Hill Road, is a Foster original, designed to “rust, develop a patina, and stay that way — no maintenance.” photo: Better Herrick 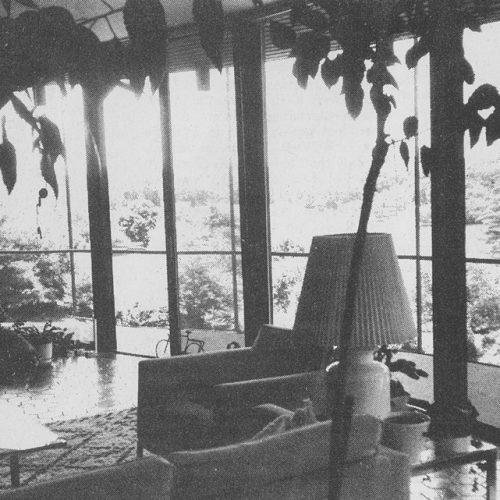 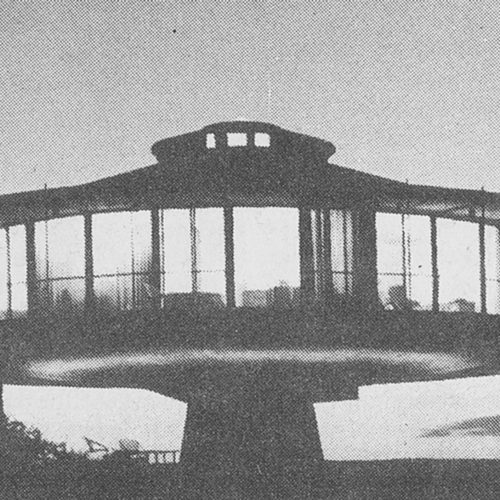 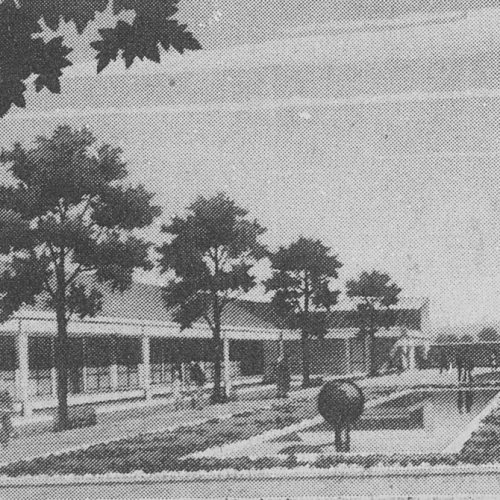 In the design phase for Novo Laboratories, Inc. of Danbury Road is this new administration/research center in Danbury, planned with a campus atmosphere, incorporating a clock tower and older existing building to be renovated as a dining hall. All service functions are in the interior; offices open to views of rolling hills and reflecting pond.

The house that put Wilton on the architectural map of the world “still goes, still functions maintenance-free, is still a pleasure,” summed up owner- designer Richard Foster. The Fosters have lived in the revolving round house on Olmstead Hill Road for more than 16 years now. But perhaps a more significant anniversary is the 20th that Mr. Foster celebrates this year as an independent architect, a “survival celebration,” he said, in his profession. His clients have been as diverse as New York University and the Montauk Golf and Racquet Club, for which he designed a prize-winning sports complex modeled on the pyramids, For N.Y.U. he built the Kevorkian Center for Near Eastern Studies, the 12-story Tisch Hall for its School of Commerce, and Bobst Library, the largest open-stack library in the world.

Progressive Architecture
He has won awards for progressive architecture (Kline Tower at Yale University and his own home) and for conservancy (his renovation of the landmark Duke Mansion for N.Y.U.’s Institute of Fine Arts, about which his client commented, “Foster’s obvious affection for a beautiful old building was manifest in his loving attention to detail and supervision of craftsmen who executed the work.” He won the 1970 Architectural Record Award of Excellence for Interiors for his Beth Torah Synagogue in Brooklyn, N.Y.

Other Foster clients have included Eastman Dental Center in Rochester, N.Y., Publishers Clearing House in Port Washington, L.I., the Museum of Modern Art in N.Y.C., and the U.S. Postal Service in Waterbury, to mention only a few. Among designs in the works for this prolific architect are corporate headquarters for Perkin-Elmer Corp. in Redding, an administration-research center in Danbury for Novo Laboratories, and an addition to the Harvey Hubbell headquarters in Orange, all multi-million dollar projects. His own house, however remains his pride and joy and the example of his work he chose for the cover of the latest brochure of Richard Foster
Associates/Architects of Greenwich.

Pioneering Design
Surprisingly, considering that its unique design, which also pioneered heating, water and electrical provision for a rotating house, has had no imitators through the years. “None that I know of,” Mr. Foster said. “The house was not designed to follow the sun,” he said. It was the lay of the land that dictated the design. His wife, Eleanor, added, “It was such a beautiful piece of property we wanted to take full advantage of it, to see everything.” They scrapped four designs before settling on the one that made architectural history. Raising the house some 20 feet above the ground allowed it to make the most of the views. It also “solved the problem of where to put the front door,” Mr. Foster said.

The door and spiral stairway to the house above is in the stationary pedestal, and constitutes part of the “architectural heirarchy” of the entire property, he said. This is an intentional alternate “squeezing and opening up.” A visitor approaches the house through a narrow stone-buttressed cleft through a hill (technically, a “haw haw”); he enters into an open parking area, passes though a “squeezing” gate in a high wooden fence into the spaciousness of a cobble-stoned area under the house; goes through the confining door and stairwell, emerging finally into the house and its 360-degree view. Glass panels form the outside walls, every other one a sliding door that opens onto a balcony that encircles the house.

Slow or Swift Cycle
At the push of a button the Fosters can send their house slowly (two revolutions a day) or swiftly (a complete turn in 48 minutes) in search of a cooling breeze, or to lee of the wind in winter, to face a sunrise or a sunset, or to focus on wildlife. (Mrs. Foster said that “for some reason the deer, and at one time foxes, look everywhere but up, and we can watch them without alarming them.”)

While we talked she offered to “turn on the house.” So smoothly and noiselessly did it glide on its specially-made ball bearing that we were not aware of its motion until our car and the driveway disappeared. The bearing is guaranteed for “87 years of constant operation,” Mr. Foster said. The Fosters do not constantly operate the revolving mechanism, and rarely full circle. It is used mainly to change the view, the preferred one at present of a pine-edged meadow that slopes gently down to Pope’s Pond shining in the sun.

The Fosters suffered through the recent draining of the pond, by its owners, the second Taxing District of Norwalk, and resultant residue of dead fish and their odor. They sympathize with residents who will be directly affected by the building of sludge lagoons at City Lake reservoir by the same landlord. They said, “How can they do this?” and expressed their frustration, “If the Planning and Zoning Commission can’t stop it, maybe we need a new commission.”

Unlike the Top of the Mart and other revolving rooftop restaurants, where only the outside platform moves, the Foster home, kitchen, bathrooms, everything, rotates. We envisioned snapping wires, water spurting from broken pipes. The miracle was ex-plained with the help of engineering sketches that showed water pipes emptying into a circular trough around the stationary cyclinder of the pedestal, wiring connections rolling on a roundabout track, similar to a trolley system.

Decorating Asset
What might have amounted to a difficult decorating job, wedge-shaped rooms, seems instead an asset. Oblique angles are filled with tree-sized plantings that flourish behind the wraparound glass walls. The odd-shaped living room easily ac-commodates an equally odd-shaped grand piano. Rectangular Indian rugs create conventional grouping for chairs, sofas, coffee tables. Glass walls are excellent foils for sculpture of metal, stone, and especially glass, which reflect prisms of light over the room. The color scheme is white and earth tones, the greenery of the outdoors playing a leading role.

Interior walls are “papered” with carpeting, an attractive “self-healing” solution to the periodic rearranging of wall hangings without leaving gaping holes. This was an important consideration. The Fosters have embellished their home with an impressive spacing of works of art. “He’s the collector,” Mrs. Foster said appreciatively of her husband.

The 6 foot 5 inch architect had arrived for our interview with boyish delight in his latest acquisition under his arm—a thermal coffee service in red plastic that had caught his designer’s eye for its engineering and esthetics.

Foster Family
The Fosters have raised three sons in their round house and are now the grandparents of five, three girls and two boys. Youngest son Bradley, has a graphics business in Norwalk, is a sculptor by avocation. His work is on view in the house and under it, where his see-through sculptor of welded railroad spikes is the sole adornment. Robert is an orthonist, a designer of braces and artificial limbs, has two children and lives in Newington. Oldest son, Craig, is an orthopedic surgeon. He and his wife, the former Julie Asher of Rivergate Drive, have three children. Julie, who may be remembered as one of Wilton High School’s cheerleaders, has just passed her Connecticut bar exams and is studying for her MBA. “Isn’t that something?” said her proud father-in-law, architect exemplar at 60-odd years, and going strong.